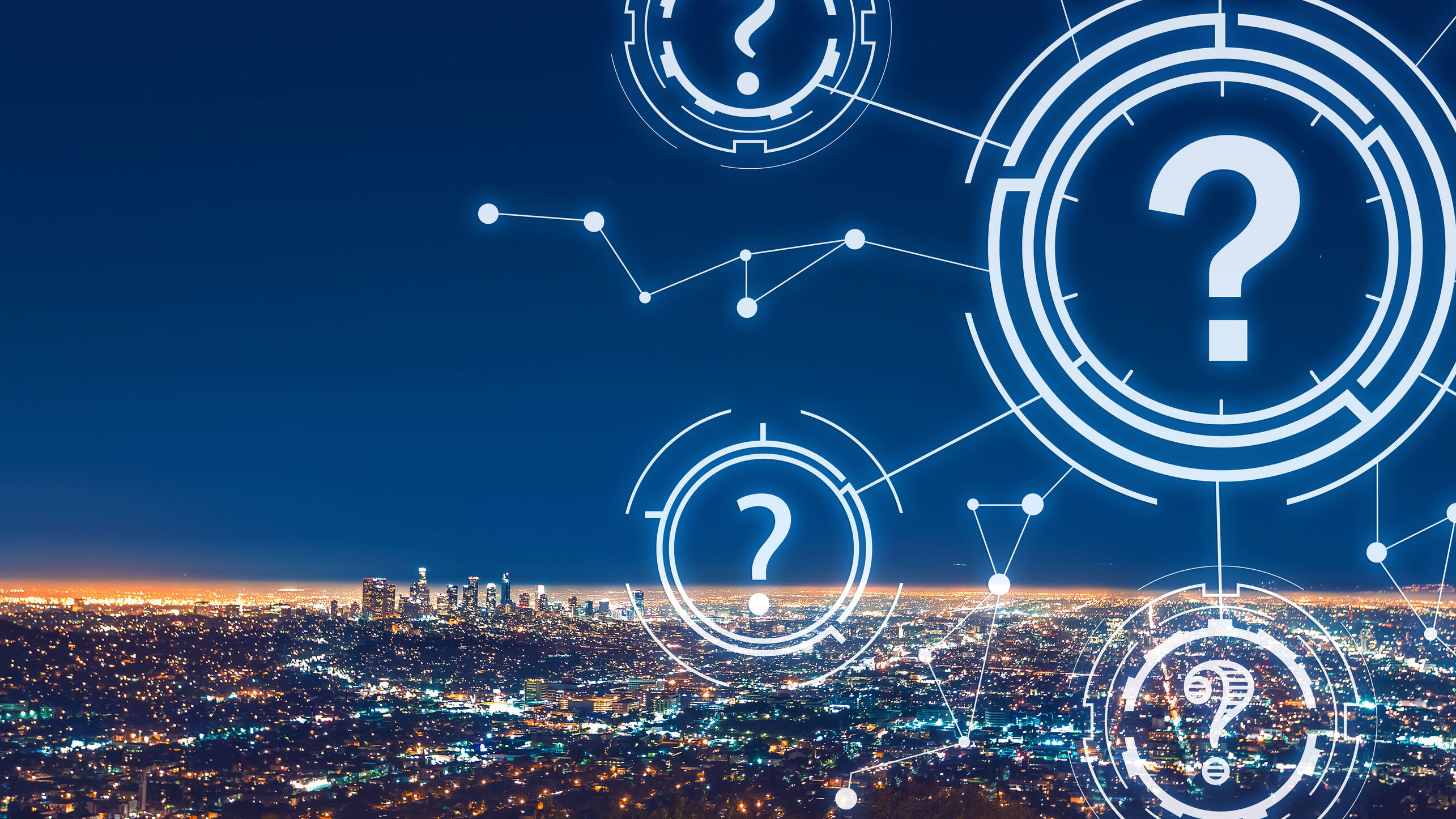 To ascertain risk, national security and intelligence professionals have long used concepts such as known knowns, known unknowns, and unknown unknowns. The idea of unknown unknowns was created in 1955 by American psychologists Joseph Luft (1916–2014) and Harrington Ingham (1916–1995). This concept continues to be used today in risk assessments and is applicable to technology.

The unknown unknowns are the threats and potential problems that remain invisible until their impact manifests. When they do, they create consequences that can disrupt the status quo.

Modern apps are extremely complex and multi-layered. You can no longer depend on monitoring for known problems. In the cloud, the application stack is so complex that issues can happen anywhere and disrupt app performance. These app disruptions can have a negative impact on the user experience, customer/user satisfaction, and even customer retention and business revenue.

But can an APM solution really monitor for unknown unknowns?

Yes, it can and here’s how. To monitor all the layers of the environment, and understand these layers and how they interact, an APM solution needs a topology model of dynamic and constantly changing environments.

Along with a topology model, a solution must have the intelligence needed to determine when a metric deviates from norms. A solution needs to be able to correlate events and anomalies and identify probable root causes, then automatically remediate the issue. An APM solution such as Broadcom’s DX APM SaaS does this with a rich topology based on our strengths in monitoring applications, infrastructures, and networks. We have a built-in, automated remediation engine that leverages the topology and helps customers automatically remediate issues when they occur.

DX APM SaaS is capable of dynamically monitoring for unknown unknowns, enabling businesses to elevate their level of observability and create confidence that they won’t run into surprises.

What does this look like? Here’s a scenario to illustrate. In this fictional scenario, we’ll demonstrate how John, an SRE/DevOps engineer, can use our DX APM SaaS solution to query across captured instrumentation data to examine, correlate, and derive insight or uncover unknown unknowns (observability) from this data.

1. John is notified of a performance problem with the ACME Business Service. It appears that several users are unable to log into the site. John logs into DX APM SaaS and opens up the experience view for service health and notices that the service is indeed “Red.” Next, he drills down into service health. 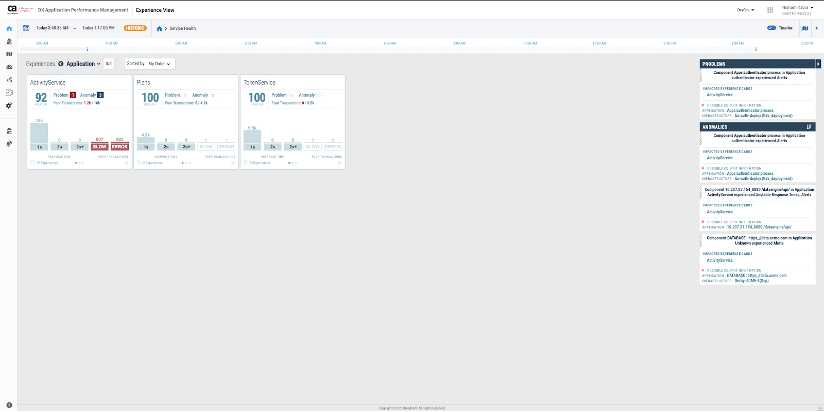 3. In the notebook view, John views the problem details and notices that there are issues reported with several different technology tiers of the application stack. 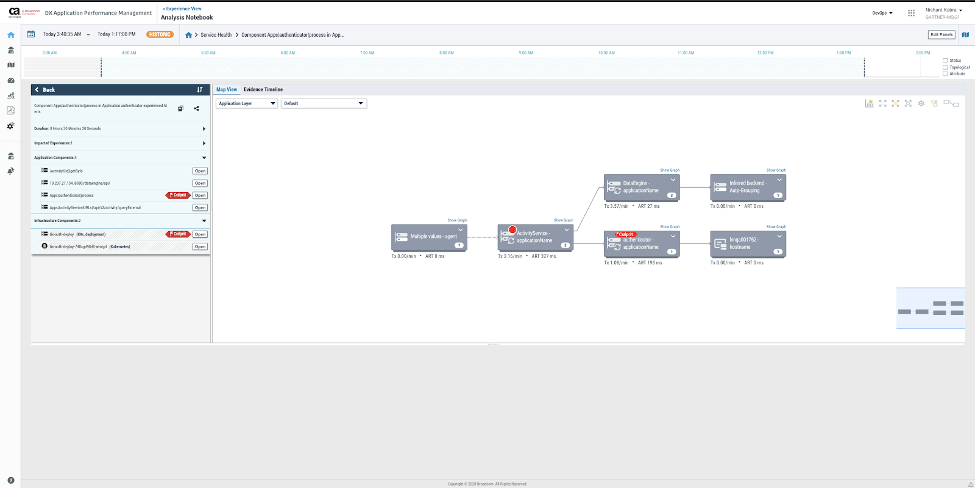 4. He notices that the system has identified the authenticator service as problematic and selects the service.

5. He opens up the traces tab to take a look at the automatically collected transactions and sees several error traces. He opens the first trace and sees that the request from the first service has timed out with a 400 error.

6. At the same time, he also observes that only some transactions are timing out while others are successful. 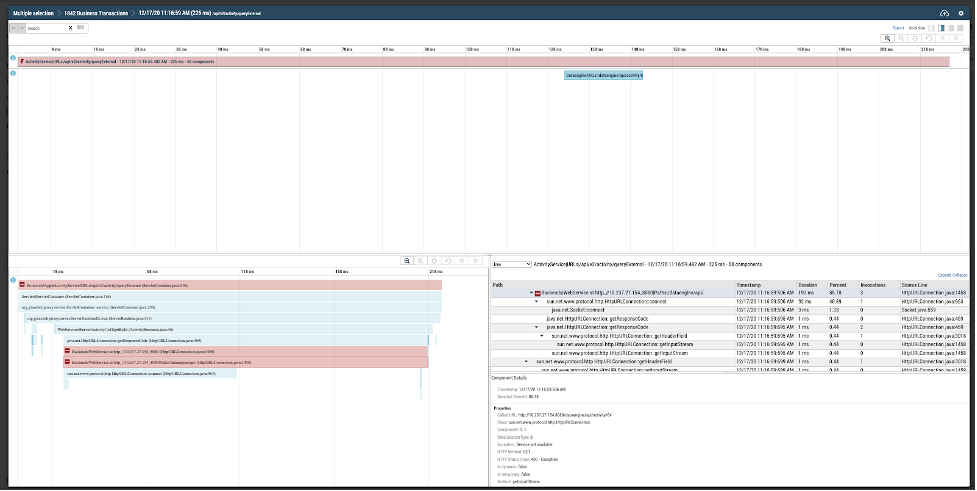 7. He wonders what could have changed with the application and brings up the timeline view to see change events. He notices a new version of the authenticator service was released to production last night. The new version was re-implemented as a microservice in a new technology stack. Furthermore, the specific team that developed the new service decided to instrument it with OpenTracing for their observability needs. Could there be an issue with the new service?

8. He turns his attention to the alarms. The system is reporting an abnormally high CPU utilization on the new service. In addition, the system has also detected a change in the deployment configuration, with the number of replicas going down from six to one.  This is obviously not right: the new service was checked in with an incorrect deployment configuration. This error caused the service to be under-provisioned, resulting in performance issues.

As you can see, DX APM SaaS automatically detects issues via dynamic baselines and correlates these seemingly unrelated sets of events, both performance and change events, together in a unified topology. This helps John quickly diagnose the problem, down to the specific line of code. As a result, the solution converts unknown unknowns into known knowns.

Learn more about how DX APM SaaS can help you address unknown unknowns.

Learn how to tie AppNeta monitoring to business value by reading the core value areas AppNeta can provide and the business challenges these address. END_OF_DOCUMENT_TOKEN_TO_BE_REPLACED

Top 5 Reasons for “Why AppNeta?”

Here's how, unlike its competitors, AppNeta helps you gain invaluable insight into the end-user experience. END_OF_DOCUMENT_TOKEN_TO_BE_REPLACED

Monitoring Azure and Your Entire Hybrid Infrastructure with DX UIM

Find out how DX UIM enables teams to do efficient, comprehensive monitoring of their Azure environments and their entire hybrid, multi-cloud ecosystem. END_OF_DOCUMENT_TOKEN_TO_BE_REPLACED

This blog offers an overview of NoSQL databases and details a few of the most popular out-of-the-box DX UIM probes that are available for these databases. END_OF_DOCUMENT_TOKEN_TO_BE_REPLACED

Traditional APM has focused on monitoring for known problems. Today, that isn’t sufficient. See how you can monitor for unknown unknowns. END_OF_DOCUMENT_TOKEN_TO_BE_REPLACED

Find out about some of the key takeaways from the 2022 NetOps Summit, which was centered on the theme “visibility anywhere.” END_OF_DOCUMENT_TOKEN_TO_BE_REPLACED

Do you have your hybrid cloud strategy all figured out?