We’ve heard your requests and feedback, and our product management and development teams have been working diligently to make impactful enhancements and updates to Agile Requirements Designer (ARD). We’re excited to release an integration with the BlazeMeter’s Scriptless Testing capability, improved integration experiences with popular tools that you use, and enhancements that will give you more flexibility and control within ARD. Keep reading to see what’s new in ARD 3.2!

BlazeMeter is an end-to-end testing solution for web applications, and our Scriptless Testing capabilities, in particular, have made it easier than ever for testers (even those who have little or no scripting experience) to create and test scripts quickly and confidently.

Now, you can take your testing to a whole new level with the BlazeMeter and Agile Requirements Designer (ARD) integration, which unifies the simplicity of Scriptless Testing and the powerful test generation that ARD offers, all in one seamless experience. Now you can generate optimized automated test cases with test data and execute them directly in BlazeMeter.

Integrations to the Tools That You Use

We’re proud to share that not only have we made improvements to many of our existing integrations, but we have also developed new integrations to popular products and tools that you’ve requested.

Our new integration with SAP Solution Manager allows you to:

Please note that this integration is a beta feature. To start using it, go to Settings > Beta Features tab, and enable the SAP Solution Manager integration.

Also, as a sneak preview, ARD 3.3 coming in the fall timeframe will allow users to build their own plug-ins… stay tuned for more information on this in the coming quarters!

More Flexibility and Control for Your Day-to-Day Usage

We know how important it is for you to have more flexibility and control in your testing processes. That’s why we’ve made enhancements that make it easier to maintain your tests when you make any changes.

Enhancements to Stored Path Type: If you use flows with subflows, you know that each subflow contains stored paths of its own. For each Stored Path, you can define a Stored Path Type, and the Path Explorer generates different paths depending on which type you select for the subflows. In ARD 3.1 and older, whenever you changed subflow types and the subflows were reloaded, ARD marked all paths as invalid, and you had to regenerate them manually.

Now, all subflow paths are stored, and changing the Stored Path Type only switches which set is active for path generation, which means you don’t have to regenerate paths manually every time anymore.

Compute Path Custom Fields: In ARD 3.1 and earlier, you could set path custom fields to attribute references and export them. Now, you can dynamically aggregate values from blocks and export the computed value on the path level. To compute the path-level value, you can use functions such as concatenation, min/max, sum, average, and so on. Export the computed value to a field in a software lifecycle integration, or use it in automation snippets, for example.

m:n Mapping: We’ve improved the user interface for decision tables and subflows, including a new “Map subflow start blocks” dialog. Now, you can select multiple specific inputs for each decision row based on start nodes. 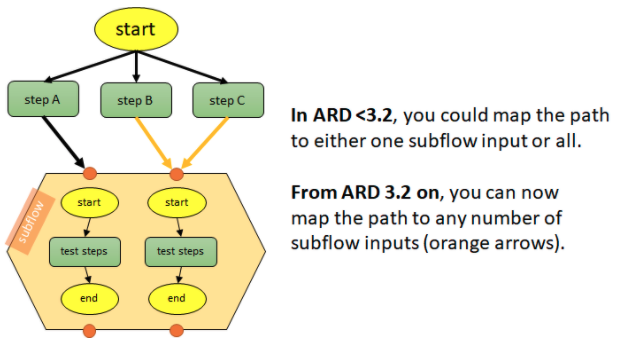 Autosave Flows: To provide you with peace of mind, we’ve introduced an autosave feature that automatically saves flows to a recovery folder. Now you can turn this feature on, configure the time period in which you want ARD to save your updates automatically, and define your autosave path.

What update are you most excited about? To learn more about the ARD 3.2 release, register for our upcoming webinar on 6/15: What’s New in ARD 3.2?

If you’d like a more in-depth overview of what’s new in this release, stay tuned for our ARD 3.2 documentation coming in June.